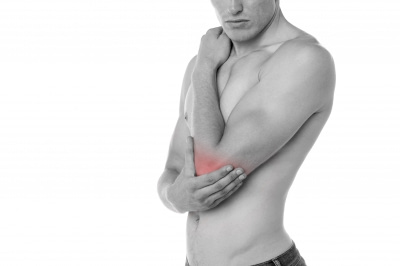 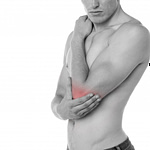 Whilst not as common as neck or back pain, patients with elbow pain or other symptoms such as numbness, pins and needles or weakness are relatively common at our clinic just outside Ednburgh. These symptoms can be debilitating interfering with your ability to work and participate in activities around the house or exercise. In particular activities which require significant amounts of grip are especially affected..

The causes of elbow pain as with pain affecting any part of the body can be categorised as being non-musculoskeletal or musculoskeletal.

A non-musculoskeletal problem is one where the pain or other symptoms are caused by something other than a joint, muscle, tendon, ligament or nerve.

If it is classed as being musculoskeletal in origin it can then be subdivided into being traumatic, non traumatic or referred in origin.

Non musculoskeletal causes of elbow pain could include infection or if you have right arm pain there could be an underlying cardiovascular cause.

Therefore if the elbow is red, hot and swollen for no reason especially if you feel generally unwell, it may be due to the elbow being infected in which case you should seek medical attention via your GP.

If you have arm pain on exercise which stops on resting it may be a sign of angina, in which case you should see your GP.

Alternatively if you have arm pain or altered sensation with chest pain or it feels as if your chest is being squeezed then it may be the case that you are having a heart attack. If you susupect that this is the case you need immediate medical attention, so the most appropriate course of action would be to phone 999. If you want to know more about how to look after those who have had a heart attack, for example if you coach a sports team then you may be interested in our Sports First Aid courses.

Is your Elbow pain being referred from elsewhere?

It cannot be stressed enough how important it is to exclude the possibility of referred symptoms. Pain or other symptoms such as numbness affecting the arm including the wrist, elbow and forearm are commonly referred from the neck, with or often without any neck pain or even neck stiffness.

To confuse the issue still further these symptoms often very closely mimic the symptoms caused by problems such as tennis elbow etc. Therefore don’t be surprised if you attend Midlothian Physiotherapy LLP complaining of elbow pain and  your physiotherapist initially assesses your neck.

Do you need medical attention?

If your arm pain has a traumatic cause such as a slip, fall or some other injury. Then it is important to decide if you suspect a fracture, dislocation or serious soft tissue injury such as a tendon rupture. For example the biceps tendon will sometimes tear if placed under a heavy enough load.

If you have any doubt regarding the severity of the injury we would suggest that you seek advice from A&E or minor injuries. Sometimes this decision is very obvious, for example if your arm is visibly the wrong shape or you are unable to move your elbow because it’s too painful. Then it is clearly broken or the elbow is dislocated.

Other instances to attend A&E would be if there is a sudden profound loss of muscle power, which would perhaps indicate a muscle tear or tendon rupture.

However sometimes this decision is hard to make, in which case you can rest assured that the staff at the clinic are all highly experienced expert physiotherapists who have worked in a range of different environments, including A&E and professional sport.

Therefore if you were to attend the clinic with a undiagnosed fracture or subluxation we would be able to identify it and liaise with the relevant medical professionals to expedite your appropriate management.

If you have sustained a fracture or some significant soft tissue injury, such as a biceps tendon rupture. Once the medics are happy for you to start rehabilitation, please contact us to arrange an appointment and we can set you on the road to recovery.

Do you have Tennis or Golfers Elbow?

Two non traumatic problems which commonly affect the elbow are often referred to as  “tennis elbow” and “golfers elbow”. These terms have fallen out of favour for a number of reasons, not least because people assumed that they were only caused by tennis or golf.

Pain on the outside of the elbow is traditionally referred to as being tennis elbow or more recently as lateral epicondylitis. It is often aggravated by gripping, twisting and lifting.

Traditionally tennis elbow was thought to be caused by inflammation of the tendons that attach to the muscles that extend the wrist. Our current understanding is that instead it is a tendinopathy as explained in the linked page. Instead of the tendon being inflammed it seems to be degenerative process, that is caused by overloading the tendon.

Generally patients will present to the clinic with tennis elbow after a relatively rapid increase in the amount or the intensity or both of activity which exceeds the capacity of the tendon to tolerate load. i.e. Too much, too soon.

Whilst this could include golf, it could and does also include work related activities such as typing or any activity which requires excessive wrist extension.

Pain on the inside of the elbow traditionally was referred to as being golfers elbow or more recently medial epicondylitis. As with tennis elbow it is caused and aggravated by a range of activities which may or may not include golf.

As with tennis elbow, golfers elbow is due to the tendon being affected by a tendinopathy, which is normally caused by the tendon being exposed to an amount of activity which exceeds the tendon’s capacity to tolerate load.

Treatment of tennis and golfers elbow is similar as the underlying pathology is the same, just affecting different tendons.

Therefore once the diagnosis has been made and any other source of symptoms has been ruled out. Your physio would then look to identify and reduce the aggravating factors.

This may require a period of relative rest from the aggravating activities and in the longer term it may include looking at how you perform certain sporting or other activities. As there may be technical faults, which result in excessive loading of the relevant tendons while performing repetitive tasks.

In addition to reducing excessive loading of the relevant tendon, your treatment may include soft tissue techneques or acupuncture to reduce pain

However the primary goal of rehabilitation would be to improve the capacity of the tendon to tolerate loading. Thereby allowing you to return to your normal activities. Therefore the cornerstone of your treament would be an strengthening programme and a stretching programme to restore full power and full range of movement.

If you have a elbow problem of any kind please contact us. We are based in Eskbank within easy reach of Edinburgh, Penicuik and the Lothians. Our clinicians are highly experienced experts in the field. We are open Monday to Friday, from 8 am in the morning to 8 pm at night, so we can see you at a time of your choosing. You don’t need to be referred by your GP, we have no waiting list and we are registered with all the major health insurers.